“I am going to close down the club, I just can’t do it anymore. It is just too much for one person and if you don’t take it, I will just shut it down!”
This was the conversation between Tony Da Silva and Craig Tornberg in late 2012. Tony was the director of Arsenal FC for over 10 years, and he just had enough of the day to day managing of a youth club.

Tornberg had already been involved in a small way coaching some of these same children in soccer tournaments and leagues. He had named this group of children his “Dream Team”. And he was extremely fond of these kids, given their efforts and desires to become better and more complete players as well as their families who attended their matches. 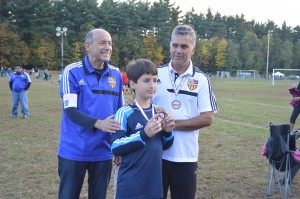 “Okay” he finally agreed. “But you will have to stay involved or I won’t take on this project” Tornberg responded. “And we will have to make several changes to the philosophy and approach of the club” he said. And Tornberg added, “Including the name of the club”.

DreamTeam Football Club of the Americas was born from that conversation. And after a tremendous amount of effort by Craig, Tony, DT coaches, players and families, DreamTeam FCA has become a “super-club”…not in the traditional sense of numbers of players but in the manner in which careful attention is paid to the overall development of our players. We remain committed to developing members of our club to be “super-players” as well as “super-people”!

Please read more about our club philosophy Mission, The DreamTeam Experience and Behind The Badge.