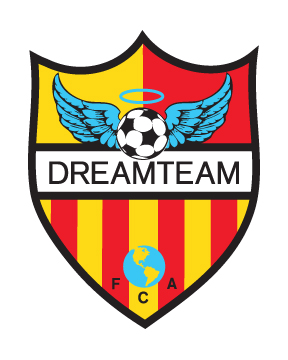 If you look at our club’s badge, you will see details that help to describe our methodology, our philosophy and our objectives.

DREAMTEAM – in the mid 1980s, FC Barcelona was suffering from some of the worst performances in their history. In 1988, the mission of rebuilding the club, was given to one of the greatest players of all time, Johann Cruyff. Cruyff immediately went about rebuilding the club, acquiring talented players from abroad, as well as placing young players from the Barca academy into important roles (One of those players, Pep Guardiola, became one of the major stars of European soccer and the manager of the Barcelona titles of the 90s).

It was not long before this “Dream Team” of Barcelona started to win titles…11 trophies in the 8 years of Cruyff leadership. From 1990 to 1994, Barcelona won 4 league titles along with their biggest victory, the 1992 European Cup at Wembley Stadium. However two of the legacies brought about through the influence of the “Cryuff era” was his insistence of providing Barcelona with an attractive attacking style of play into a league that was previously known as one of strength and power as well as his influence in establishing the now famous Masia, a training ground for youth player development following the same style of play as the Barca’s first team.

OUR GLOBE – immigration into the United States has seen dramatic changes over the past 50 years. Much of the immigrants during the 50s, 60s and 70s were from Europe. Trying very hard to assimilate into the mainstream of the United States, these immigrants attempted to “fit in” wherever possible. Learning to love the traditional sports of the time was very common. Baseball, Football and Basketball had new audiences, while their own traditional sport, soccer, was often left back home in Europe.

The shift in immigration over the past 25 years has been tremendous. One of the biggest changes has been the volume of immigrants coming from south of the United States…Mexico, Central and South America. And along with this shift has come a cultural shift in the United States. These “New Americans” have put their stamp on US culture, bringing their language, their music, dance and art to the US. And they have kept true to their passion for soccer…making it clearly their sport of choice. DreamTeam’s Globe represents the “Americas” (north, central and south), the region of the world that has provided so many of our members, impacted our style of play, our player’s ability with the ball and the brotherhood we share in our love of the sport of soccer.

OUR WINGS – With wings you can fly, and fly is what we envision for all of our players. This does not mean all of our players will be able to become or even choose to become professional soccer players. But while some will succeed with their hard work and determination to get to the professional level, we see all of the players we work with becoming professional people! And this means the type of people who understand the important values of respect, leadership, responsibility, community, hard work, perseverance and dedication. Our wings are wings of inspiration, that guide our principals and remind us all that we CAN fly – and it is with the ball and through the ball that our players will take flight!

OUR HALO – Generally referred to with a ring of light that surrounds a person in art, Halo’s have been used in the iconography of many religions to indicate holy or sacred figures. At various periods, a halo has also been used in images of rulers or heroes. Sacred people were depicted with a halo in the form of a circular glow, and in many colors. DreamTeam uses our halo to depict two very special ideas – first, how our players see the ball…not something to fear but something to welcome, enjoy and even love. But the ultimate reminder to our families as well as our coaching staff is that our children ARE OUR ANGELS! We must shower them with praise, love, support and admiration.

YELLOW AND RED – a base of our badge is the color yellow…which is the color of sunshine…hope…and happiness. Yellow is a color of warmth, cheerfulness as well as increased mental activity and muscle energy. When accented on black, it stands apart in a vibrant manner.

The contrasting color is our red, which is associated with passion, desire, courage strength. It is daring, determined and assertive. It is a color that stands out and represents the making of quick decisions (a reason fire engines are red!).

The use of red on the base of yellow is symbolic of our respect for that Dream Team of Johann Cryuff, these being the colors of Cataluña, where that special club of FC Barcelona revolutionized soccer for generations to come.

Our players respect the club they play for – learn to understand that our main purpose is our values. We teach a high level of soccer performance, while we develop our players in a special way of life. And it is with mind, body and soul that our players proudly display our badge on their chests!