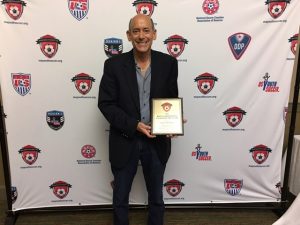 Boston City FC Managing Director Craig Tornberg, who coaches DreamTeam Football Club of the Americas with a mission to better provide experiences for underserved communities in four locations in Massachusetts, has been honored by Mass Youth Soccer.

Tornberg has been named the organization’s Boys Competitive Coach of the Year for 2016 and received his award at the Mass Soccer 2017 Workshop and Appreciation Night on Saturday.

Having witnessed the many problems in developing young players in the ‘pay to play’ models of soccer, Tornberg decided to start DreamTeam FCA, using methodology learned in collaboration with the prestigious MBP School of Coaching in Barcelona, Spain.

With about 70 children who only meet their entire teams when they play in their league and at tournaments, the children’s results have been remarkable.  With the emphasis of not only developing a ‘smarter’ player but also setting high expectations for these children as strong selfless individuals, DreamTeam players have stood out both on and off the field.

“I am very surprised but incredibly appreciative of Massachusetts Youth Soccer for selecting me for this prestigious award,” said Tornberg.  “But I must recognize the children, their parents, our coaches and the several partnerships we have in our program for their commitment to this project.  Every coach in sport has a tremendous responsibility towards the children they instruct and the impact should never be taken lightly.”

Tornberg is very familiar to local soccer fans and the New England community. His background is filled with decades of playing, administrating and developing the sport of soccer.

After his involvement in running international matches in New England during the early 90s, which included experience at the FIFA World Cup 94, Tornberg accepted a position with the New England Revolution. During his 18 years with the club, Tornberg was involved first hand with bringing professional soccer back to the New England region. It was during those years, while serving as general manager and vice president, that the club went to the MLS Cup 4 times in 7 years, lifted the U.S. Open Cup in 2007 and won the Superliga in 2008. During this time, Craig received several honors, earning a citation from the Massachusetts State House as well as from various ethnic communities throughout the region, recognizing his many contributions to soccer and the people impacted by his work.

In 2013, Tornberg returned to his consulting career, advising soccer clubs and organizations both domestically and internationally. Working with groups from United States, China, Brasil, England, Spain among others, Craig has successfully guided many projects in the soccer business. In 2016, the area’s newest pro soccer franchise, Boston City FC contacted Tornberg and he agreed to serve as managing director for the club. After a tremendously successful first year, the club will continue to expand its role in the Greater Boston area with Tornberg continuing to provide direction.

Tornberg sits on the board of the New England Soccer Museum and the advisory board for several non-profit organizations in the area. He has served U.S. Soccer as a match commissioner as well as CONCACAF as a general coordinator, overseeing international matches and tournaments throughout the North and Central American region.