After receiving the disappointing news that the u11 and u12 matches were postponed to field closures, the u10 boys took the field against Liverpool FC in Webster, Massachusetts. While the long car ride out to the field was through pouring rain, the squad was greeted with clear but freezing temps. And even though the boys were determined to not let the elements effect their play, it appeared the cold got the better of the baby DTs as they had difficulty getting into the dribbling and passing rhythms the squad is known for. The first few minutes saw Liverpool with the better run of play and if not for the strong work of keeper Jackson Contois and defenders Kaik Reis, Ryan Viana and center back Bryan Bueno, the DreamTeam could have been down a goal. 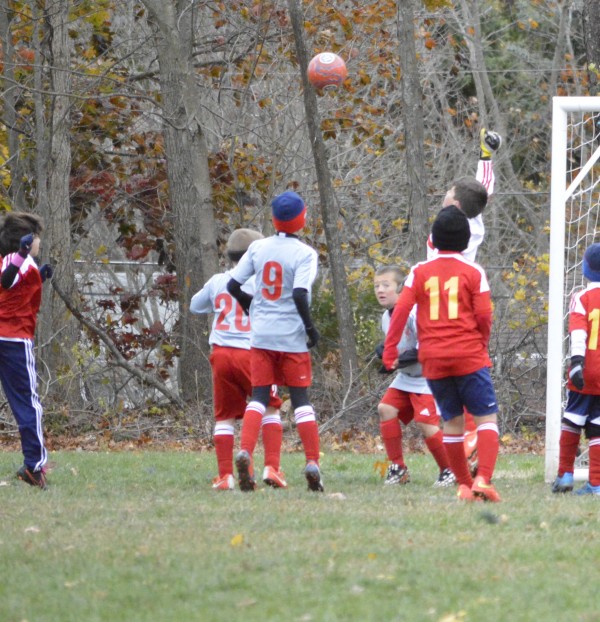 Slowly the baby DT’s worked their way into the match with the controlled offense that marks their game. They finally broke the scoreless deadlock after winning a corner kick. Bryann “Neymar” Almeida became provider as his perfectly placed corner found the head of Brian Bueno in the box. Bueno floated the ball over a very capable Liverpool keeper.

The second goal was scored in similar fashion as another “Neymar” corner found the head of David Russell. David flicked the ball expertly into the back of the net providing the 2 goal advantage at the half. 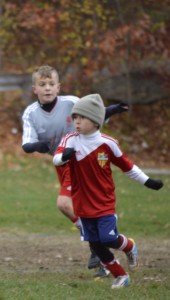 The second half began with the 10s in control. David Russell beat several players into the box and calmly placed a dangerous ball into the 6 yard box. After two strong attempts on goal the ball rolled out to an alert Paolo Tornberg Ayala who one timed a hard drive high into the net, beating a bewildered Liverpool keeper.

While impressing throughout the match with his defensive work, Ryan Viana put his name on the score sheet after coming back on the field from a temporary injury break. He won the ball in the middle of the park and dribbled by several players. At the top of the 18 yard box, Ryan finished clinically into the corner for the club’s fourth.

Late in the match, a beaten Liverpool defender unwisely handled the ball in the penalty area while under pressure. David Russell stepped up to the line and blasted his second of the day completing the baby DTs 9th consecutive victory of the season!