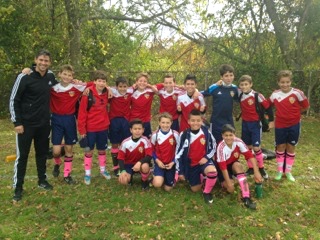 DreamTeam U12 Blue was drawn into a match with one of the top teams of the division, Weymouth United. Weymouth had been unbeaten since the first week of the season and brought a team hungry to continue their run. The DreamTeam was bringing a strong run of their own, having only given up 1 goal in 3 matches while scoring 13 of their own. With first place on the line, the match was physical at the start, several players coming off with nicks and bruises. Strong wing play from Lucas Da Silva, Anderson Cardona and Jorge Rodriguez provided service to front-runner Tristan Woods and created some early chances for the squad. Weymouth constantly sent players forward but was held in check by the DreamTeam defense and the tracking back of the midfield and forward lines. Oliver Sharpe subbed on to the central midfield and his swift combinations with his wingers finally found Richard Nunes at the top of the box. Richard rounded the Weymouth defender and tucked the ball into the back of the home team’s net for a 1-0 DreamTeam advantage. It was then GK Vitor Barros’ opportunity to shine as his amazing save with his leg kept the DreamTeam’s advantage at the half.

The second half was much as the first with Weymouth sending numbers forward and the DreamTeam’s defense keeping them at bay. Nunes gave a cushion to the visitors as he again went in on goal and scored on a tight angle that was too good for the Weymouth keeper to save. The squad continued to play one-two futbol and at the 45 minute mark of the match, Richard’s strike overpowered the keeper and trickled in to the goal making it 3-0.

Weymouth continued to mount attacks with most being thwarted by the defending of Max Stakun-Pickerin, Itallo Campos, Raffaele Bauer, Michael Justiniano and Ian Louback, but it was Vitor Barros who again made a miraculous save stretching out full to deflect a ball that was struck through traffic and labeled for the far corner. Final result was 3-0 with the squad now undefeated in 7 weeks, adding to their record of shutting down the opposition and sole possession of first place.

The Under 11s sent another strong message to the U12 Red division with a resounding 14-0 victory against an overmatched PT USA squad. 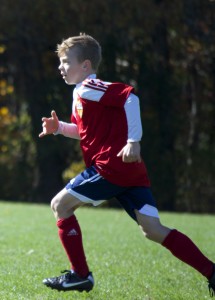 Playing away for the first time in 4 weeks, the squad showed composure throughout the match. The 11s squandered a couple of early chances before a Brandonn Bueno pass found Felipe Andrade in the 12th minute. Taking the pass in stride, Felipe found the upper part of the net for the team’s first. The goal unsettled the home team as a minute later an alert “Neymar” Almeida picked up on a defensive error and slid the ball by the left side of the keeper. The home side attempted to get back into the match and got numbers into the DreamTeam’s defensive third. However, GK Bruno Kajiwara acrobatically saved a shot that was bound for the upper 90. At the 17- minute mark, Brandonn struck for a goal of his own, picking up a ball at the top of the 18 and dribbling by several PT USA defenders, slotting the ball home. PT USA attempted to get into the game by pushing players forward and it was GK Bruno Kajiwara involved in the next goal. He alertly picked out Brandonn at the midfield. Brandonn controlled the ball and sent a perfect pass to his line mate Felipe who struck for his second of the match. A perfectly timed combination provided the 5th goal as Jaime Garcia found Joel Russell who passed to Neymar for his second of the contest. Junior Balla began the next with a pass to Joel, who played a give and go with Junior and found himself alone in front of the PT USA keeper. Joel then returned the favor to Junior who struck for his first goal of the campaign, making it 7-0 at the break.

It was more of the same for the 11s, as they hit for 7 more goals in the second half. Jaime rounded the defense and sent a ball across the box for Junior to tap in for his second. Kevin Nunes, who was involved throughout the match in pushing the attack forward, found Felipe with a pass and sent him in for his 3rd. Jaime intercepted an errant pass and scored. Brandonn again dribbled by several defenders for his second. Jaime hit number 2 with a perfectly placed shot. After a DreamTeam attack, the ball came out to an ever-alert Felipe Andrade who caught the keeper off his line for a beautifully arched chip into the goal, his fourth of the day. Igor DaSilva capped the 14-goal day with a tap in.

The baby DT10s had a rematch with an opponent they faced in the Seacoast United tournament, FC Spartans. And while the Spartans brought in reinforcements it was the DT 10s who struck first. “Neymar” Almeida took a pass in the first minute of play and rounded the right side defender who took Neymar down in the box before he could get off his shot. “Neymar” stepped up to the spot and blasted his penalty kick into the net for the team’s first goal. Shortly after this, a Victor Schimmelpfenning pass found David Russell who scored neatly into the Spartan goal for a 2-0 lead. But the Spartans would not go quietly and a perfectly placed corner out of the reach of DT keeper Jackson Contois found the knee of a Spartan attacker for their first goal. The baby DTs answered swiftly though as David Russell found Neymar who showed amazing footwork in the Spartan defense for a great goal and a 3-1 lead. Neymar opened up some breathing room as the combination of Jordi Tornberg Ayala to Anthony Frois to Neymar, allowed him to score his 3rd of the match and 5th of the day.

The match was tightened after a Spartan free kick was expertly placed in the DreamTeam goal making it 4-2. But the intense defensive work of central defender Brian Bueno anchored the strong performances of Kaik Reis, Ryan Viana and Gabriel Laudares, and the DT 10s saw the match out to the referee’s whistle. DreamTeam 4 Spartans 2.