This weekend will mark the end of the final spring season for many of the DreamTeam entries. U10, U11 and U13 will finish at our home field in Sherborn while the U16 squad will be at our home in Everett. Both U9 squads end their season on 5-June with doubleheader action.

A full slate of matches were played by DreamTeam last weekend – with the U9 Lions and U9 Cachorros drawing early matches. 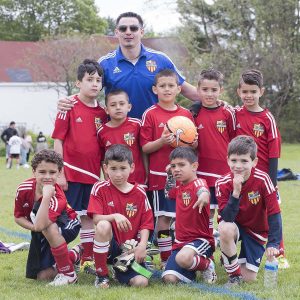 The Cachorros played two matches in Beverly MA and showed their quality by taking apart 2 teams. Malden Cosmos proved no match for the DreamTeam boys as they put up a strong 9 goals on their way to a 9-3 victory. The Boston Storm could not hold off the Cachorros as they ran up another 6 goals on the way to a 6-2 result. Caik Reis dominated the midfield as he scored and assisted goals for several of the young DT players.

The Lions traveled to Medfield to face Nashua World Cup and Liverpool. In the close matches, DreamTeam came away with a 5-3 win against World Cup but fell 3-2 against Liverpool. Alan DeLeon led the squad with a pair of goals.

DreamTeam U10 squad played in front of another vocal group of opposing fans in Northborough as they faced Best FC in a morning encounter. The match was a hotly contested match with the DT 10s taking the early lead but only finding themselves looking at a 2-1 deficit. The boys found another gear and took home a 4-2 victory behind 3 goals by Jordi Tornberg Ayala and a final strike by Anthony Frois. Xande Santos anchored a back line that could not be penetrated as the match wore on.

The U11 team provided Vitoria SC a 4 goal advantage before showing why they have been a top side throughout the season. Playing in very substandard field conditions, the team found themselves down 4-0 early on. The second half found the team playing through the challenges and scoring 3 goals. Anthony Frois started the comeback followed by a hot Henry Romero and Gustavo DosSantos. But in spite of the continued attacks at goal, the 11s fell 4-3 to a very relieved Vitoria team.

The U13 squad struggled in a late match in spite of the 2 goals and stellar playmaking of Lucas Da Silva. The inconsistency of the team personnel has hurt the group’s results this season and hope to end on a positive note against Forza FC this Sunday.

DreamTeam U16 played their best match of the season in spite of drawing 1-1 with Wakefield SA. The team has shown tremendous improvement throughout their inaugural season and are looking forward to finishing on a high note at the upcoming final match of the spring.