DreamTeam’s Pedro Teixeira Sampaio (17 years) was invited to train with the New England Revolution’s U18 Academy squad earlier tonight. Pedro impressed the Rev coaches and was immediately invited to return to training tomorrow.

Also training at the Dana Farber Fieldhouse at Gillette Stadium tonight were DreamTeamer’s Santiago Cardona and Gustavo Cassimero. Santi, is in his third season with the academy having entered at 13 years old. Gustavo is concluding his first season with the Revolution U14s but was called up into the U16 side for the Showcase tournament to be held at Tampa, Florida!

Congratulations to Pedro, Santiago and Gustavo! 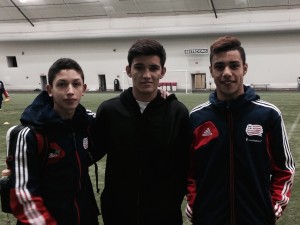