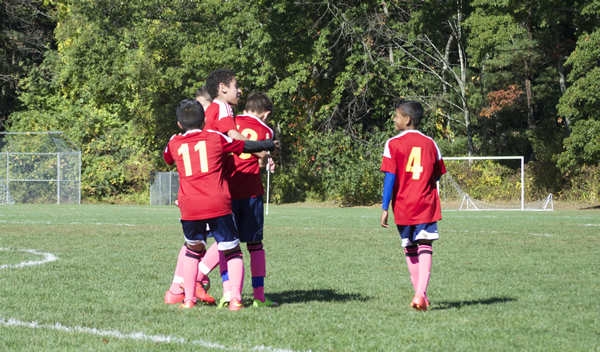 DreamTeam’s entries into Maple continue to impress by sweeping all points available in the 3 matches played. The day saw all of the DreamTeam players wearing Pink socks instead of their home Reds, to commemorate Breast Cancer Awareness Month.

Sunday kicked off at 9AM as DT U12’s faced a very formidable Forza United team. Forza was intent on taking the DreamTeam out of their passing rhythm by putting intense pressure on the ball. DreamTeam finally broke through when a Richard Nunes’ pass connected to Lucas Da Silva, who found the back of the net and the 1-0 DT lead. Forza however was not ready to throw in the towel and hit for their own goal to even the contest at 1-1. Great saves by both the Forza keeper and DreamTeam GK Vitor Barros enabled the match to go into halftime tied.

The second half began with the DreamTeam probing for more goals and combinations between the midfield and forwards finally broke through the Forza defense. Richard Nunes added to his team leading numbers when he scored DT’s second of the match. Goals added by Lucas Da Silva as well as another tally by Richard secured the 4-1 victory.

The DreamTeam U11’s and the New England Rush U12’s entered the match in a four-way tie for first place in the Maple “Red” division. The Rush showed skill and discipline; showcasing a well coached skillful side. Felipe De Andrade terrorized the left side throughout the match and his runs down the wing opened several opportunities for his teammates. A scramble inside the Rush 18 was played back to Luan Da Silva, who one-timed a blast into the upper 90 of the Rush goal. GK Bruno Kajiwara preserved the lead, coming off his line to snuff out several Rush counter attacks. Later in the first half, after winning a corner kick with slick ball handling, Felipe sent his corner just out of reach of the Rush keeper, finding the head of Brandonn Bueno, who left no doubt with his delivery. The match continued at 2-0 with both team’s defenses taking center stage, stopping all of the advances of the other. After wining a free kick from about 21 meters from goal, Felipe sealed his “man of the match” honors by sending his effort into the goal and a 3-0 lead. The Rush, with a never say die attitude, finally broke through a very tired DreamTeam late in the match to see the match out at 3-1.

It was then the Under 10 team’s turn to entertain. Having been recently promoted to the Maple First Division, their Sunday test was against a skillful Strikers club. Slick passing and movement by the DreamTeam players caught the Strikers off guard but early shots went wide. The deadlock was broken as Jordi Tornberg Ayala beat a Striker defender and then passed to an open Bryann “Neymar” Almeida who took a touch into open space and buried his shot into the back of the net. Shortly thereafter, it was Neymar again, who dribbled by several Striker defenders, cut to his right and launched a 20 meter shot that was impossible to save. With a 2-0 lead, DreamTeam continued to advance into Striker territory but it was another keeper, DT’s Jackson Contois who snuffed out any of the opportunities the Strikers created from their counterattacking efforts.. Late in the match, a through ball down the center channel found a Striker forward who finished into the corner of the net. But it was too little too late as DreamTeam held on for their 2-1 victory.

The morning concluded with a celebration of Jackson Contois’ birthday, with the DreamTeam players enjoying cupcakes. 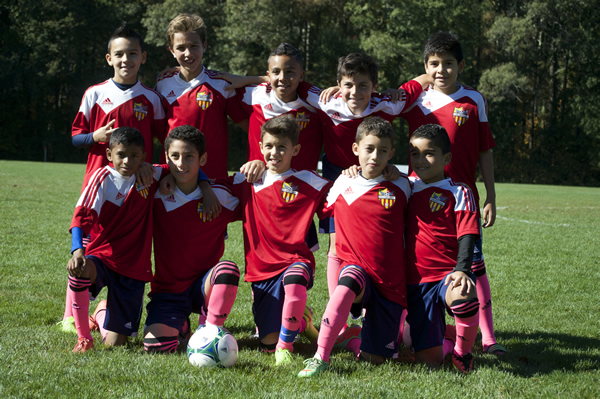