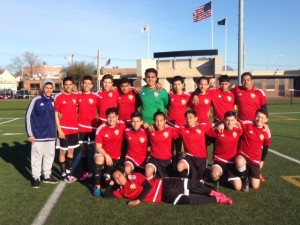 U16 DreamTeam Everett U16 Boys

DreamTeam FCA opened up the 2016 spring season with some positive results from the three age groups that could get in their matches.

DreamTeam Everett U16 Boys closed out the day with a pounding of Mill City FC. After surrendering an early PK to the visitors, the 16s answered with 5 unanswered goals. Thokmey Dorjee started the romp with a shot from 35 meters that beat the Mill City keeper. Christian Santos and Thiago Almeida’s strong finishes gave the home team some breathing room before Thokmey added his second of the match. Marlon Deleon found the back of the net with a perfectly placed free kick to finish the scoring. DT 5, Mill City FC 1.

The Under 10 DreamTeam was solid in the back throughout the match and frustrated Explosion FC throughout the early match of the day. Xande Santos, Gustavo Santos, Youssef Fadi and Christian Aquino were secure throughout with Kaik Reis providing the cover in goal. Jordi Tornberg Ayala struck twice in the match following up a GK mistake and later beating the keeper after taking a perfectly weighted pass from midfielder Anthony Frois. Minor Ojanny Angel finished the scoring with a strike from 20 meters that the frustrated Explosion keeper could only watch. The match ended DreamTeam 3 Explosion FC 0.

After starting slowly and conceding 4 goals to an aggressive Liverpool side, the U13 DreamTeam fought back valiantly. Alexis Barrios found the back of the net with a shot from 25 meters. Franco Silveira Jr. followed with a chip over the Liverpool keeper for the squad’s second of the day. The 13s dominated the final 10 minutes looking for their third, but could not capitalize on their chances as they dropped the points with a 4-2 loss.

The Under 11 match was postponed for field closing but will be made up over the next few weeks.