Sunday action produced a mixed bag of results for DreamTeam FCA. And while the U12 and U11 sides continue to grind out results and the U11 Milford side showed tremendous improvement, the baby DTs struggled for the second week in a row.

The early morning saw home side North Shore United’s U12 side jump out to a lead against DreamTeam’s U11 Green side. But the squad found it’s rhythm and timely goals from Gabriel Magalhaes and Brandonn Bueno saw DreamTeam take over the lead. Bryann “Neymar” Almeida finished the scoring and celebrated his 10th birthday with a goal to secure a 3-1 victory and the full 3 points for the squad. 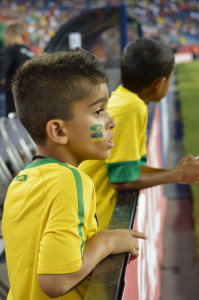 The U12 Blue side traveled to SF Vikings and again found the going difficult in the first half. Strong defending by the DT backline held off several corners and the goalkeeping of Ranulfo Lopes kept the home team off the board. The second half found DreamTeam controlling play. Steady work by Oliver Sharpe and Kayo Sousa in the midfield and Tristan Woods up top created several chances but the squad could not find the back of the net. The final 0-0 kept the team’s unbeaten record in place.

The baby DT’s traveled to Granby, MA to face a strong Euro United FC squad. The DTs struggled in their traditional passing game against their bigger rivals. Falling behind by 2 goals, the team fought back behind the hard work of Ryan Viana as his individual effort netted the squad’s first. Ryan’s hard work again was rewarded as he was taken down in the box at the start of the second half. Jordi Tornberg Ayala calmly walked up to the spot and placed his shot easily by the beaten Euro keeper and equalized the match. But the squad could not shake the errors and Euro capitalized 3 times on DreamTeam mistakes to take away a 5-2 victory.

The DT11 Milford team improved dramatically from their first effort of the outdoor season. The team gave all PT USA could handle in the early going. Joao Victor Faria made history with the team’s first goal ever. Strikes by Gabriel Ferreira and Gabriel “Bill” Silva provided DreamTeam the 3-2 lead. But it was not enough to hold off a game PT USA as they took advantage of the inexperienced squad and ultimately rolled to a 7-3 victory.