After having the week off due to the weather cancellation of last weekend’s match, the DreamTeam U11 squad picked up where they left off by dominating play over 60 minutes and seeing out a 9-0 win against FC Blazers.

The match began with the DreamTeam controlling play right from the start. The DT 11s constantly got themselves forward although they could not find the net through 11 minutes. In the 12th minute Brandonn Bueno collected a pass at the top of the box and while breaking in on goal he was taken down by the Blazer center back. The keeper guessed correctly and saved Brandonn’s penalty kick effort but Bueno alertly followed up his own shot, and fired the DreamTeam into the early lead. The score remained the same until a nifty passing combination from Joel Russell to Brandonn and back to Joel gave the 11s their second goal. As the half was coming to a close, GK Bruno Kajiwara delivered an outlet pass that was expertly brought down by Dylan Henao on the left flank. Dylan played the ball forward to Joel who touched back to Dylan. Henao drove to open space and cleanly beat the keeper providing the three- goal halftime lead.

The second half continued in the same fashion, and it was early in that Dylan Henao won a free kick at the top of the box. Brandonn Bueno stepped up for the kick and with a wall built out of 5 of the tallest U12 players recently seen; Brandonn placed his kick off the crossbar and into the goal.

Bueno, who conducted the midfield like a conductor in an orchestra, again factored in the attack. Changing the point of attack with a beautifully placed pass to Felipe Andrade, he sent his line mate in on goal. Andrade’s strike could not be handled by the keeper and Junior Balla pounced on the rebound adding to the rout. The passing continued as Felipe found Brandonn who returned the ball to Felipe. Adrade chose to drive the ball across the face of the goal. The ball slipped to the far post where a hungry Dylan Henao calmly finished his second of the contest. Knowing that the back line of Luan DaSilva, Igor Da Silva, Michael Alpers and Kevin Nunes were not allowing anyone by, the DreamTeam attack continued to move forward. “Neymar” Almeida collected a throw in and played the ball through to Joel Russell. Joel’s shot was bobbled by the keeper and but his pace was too much and he beat the keeper to the rebound for his second. Brandonn Bueno got back on the board after picking up a ball about 25 meters out from goal and finished perfectly into the net for his second. But it was Junior Balla who finished out the lopsided affair as he poked home a Joel Russell corner, leaving the keeper and the entire Blazer squad bewildered.

The team travels on Sunday to Chicopee to finish off their season as they attempt to conclude the season at the top of the table in the U12 Red Division. 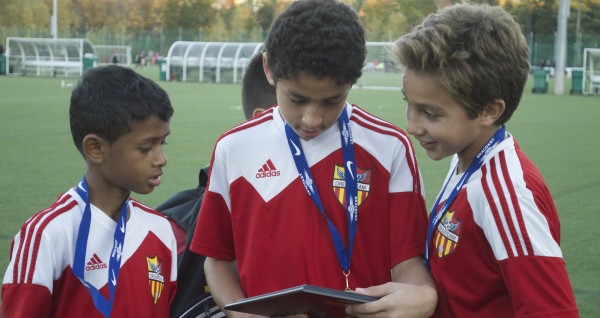