DT 10s, 11s and 16s are impressive in victory while the Under 12’s icy start has them fall for first time this season.

All 4 DreamTeam Futsal squads were in action to open up the New Year of 2015 this past weekend. And the DreamTeam U11 side was particularly ready as they looked to avenge the pounding taken by the Under 10 team at the feet of FC Stars at the conclusion of 2014. And it did not take long for a Luan Da Siva strike to open the scoring early in the contest.

The Stars however proved a worthy opponent and took advantage of some uncharacteristic poor handling of the ball and soon leveled the score at 1. The capable Stars used speed and persistence as they again won the ball in midcourt and fired past the outstretched arms of GK Bruno Kajiwara. Their lead did not last long as Brandonn Bueno found Felipe De Andrade for the second DT goal and it was deadlocked at 2. A Brandonn to Felipe to Luan combination gave DT the lead at 3-2. Brandonn then found a streaking Joel Russell who hit his first of the day. But the Stars struck quickly twice more and the game was knotted at 4-4. Bueno, playing in the classic pivot role, held off his challenger, turned and fired a laser on target breaking the tie but the pesky Stars would not go quietly as they scored on a direct free kick awarded by the referee 5-5. Bueno and Russell would each light the goal light several times however, effectively putting the game away. A quick goal by Joel Russell, then two by Brandonn opened this match up. Then Joel’s individual effort, dribbling into the box and beating several Star players and finally the keeper was then followed by season scoring leader Brandonn Bueno connecting on his fourth. Joel hit again but then the Stars scored 3 quick goals to make the game appear closer than it was by that point. Brandonn put the finish on the scoring as he toe poked the final goal and his fifth, putting an exclamation point on a fine outing. GK Kajiwara, who excelled all night with several key saves and goal clearances that started several of the attacks, left the crowd in awe with a tremendous leaping save to close out the match – DT 11s with a resounding 13 goals v FC Stars 9.

The Baby DT 10’s match started off quickly as Bryan Bueno immediately factored in the offense. The DreamTeam “fixo” picked up a loose ball at the midcourt and after taking a touch blasted a ball towards the goal. The ball deflected off a defender and found the net for the first goal. He was not finished though, as he picked up on another mistake by an overmatched NEPFC team and with a strong left foot secured his and the team’s second. Cauane De Andrade connected for the third goal just before Bueno hit his third. Bryan’s teammate and brother Daniel then stole a ball and rifled a shot into the back of the net. Adrian Yemen, in a rare substitution role, came off the bench and immediately factored in the match as he deftly passed to Cauane who finished for the comfortable 6-1 lead. Adrian finished the half with a goal of his own, unassisted. 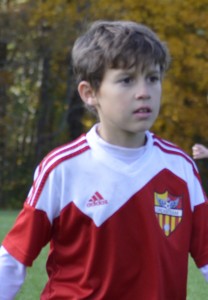 Opening up the second half, Ryan Viana received a perfect pass from Cauane and finished. Bryan Bueno added his fourth before Ryan scored again. Not to be outdone, Daniel Bueno scored again. Anthony Frios showed skill and poise as he went 1 v 3 with the defense and tallied a goal. Jordi Tornberg Ayala received a pass from Cauane and Adrian and beat the keeper from the right side of goal.. Cauane and Adrian quickly added goals to finish the game for a DreamTeam goal fest!

It was very different for the Under 12 team as the alarm for the wake up call never sounded and the Bolts U12s struck for 5 goals within the first 6 minutes. But in spite of this unsettling beginning, the squad has a resiliency far beyond their young years. They slowly chipped away at the lead and while they opened the second half down 6-1, they gamely struck for 4 goals making the game tight at 6-5. As the match got into a battle of both wits and strength, the Bolts were able hold on for a very close 7-5 win. Brandonn Bueno contributed with 3 goals and Felipe De Andrade struck for 2 to again lead the way for this team.

On Sunday, the U16s found themselves up against the NEPFC U17 team and walked away with a resounding win. Lucio’s pass found Manny Nunes to open the scoring. Paulinho added to the DreamTeam lead as he dribbled the opposition before putting the ball away for the second. Manny returned the favor serving Lucio, who did not disappoint. After NEPFC got one back, Damain Winchester finished off another fine pass from Lucio. Santiago Cardona, playing his first match of the season with the team after resting an injury last in the fall season, scored to bring the lead to 5-1. Two goals by NEPFC made the match a little tighter before Paulinho took over. Striking his second, he then received a pass from Santiago and made it 7-3.Santiago scored twice more after receiving a pass from Manny and then again from Lucio. Lucio and Paulhino each contributed to the outcome prior to the squad giving up a consolation strike to the opponents, 11-4 DreamTeam victory. 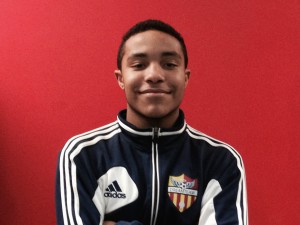