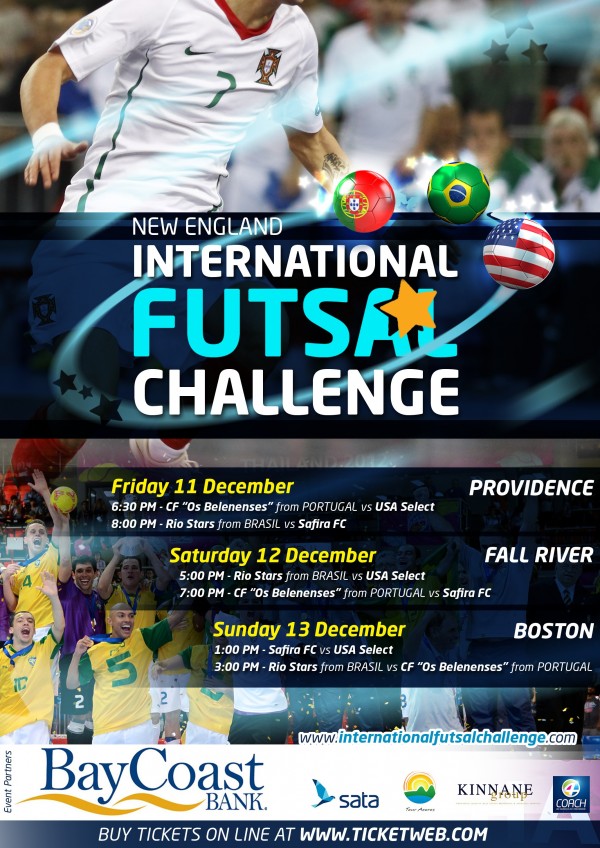 For the first time ever, Boston will host professional Futsal players from Rio de Janeiro, Brasil and Lisbon, Portugal to participate in a four team Futsal tournament.
The event, which is scheduled to be played on Friday, Saturday and Sunday, 11 through 13-December, will be held in 3 different New England locations. The four teams will be featured in doubleheaders that will be played in Providence, RI, Fall River, MA and Boston, MA gymnasiums.
The All Star team from Brasil is made up of Futsal players from some of Rio De Janeiro’s biggest clubs including Vasco de Gama, Flamengo, Botafogo, Cabo Frio and Fluminense. The All Stars are scheduled to play against C.F. Os Belenenses of Portugal’s first division at 3PM on Sunday, 13-December in the final match of this 3 day tournament. The match will take place at Clark Athletic Center at the University of Massachusetts-Boston and will be preceded by 3 time US champion Safira FC taking on the US Select at 1PM as part of the Boston doubleheader.
DreamTeam FCA will be supporting this event and encourages our players and families to attend the Boston doubleheader on Sunday 13-December. Tickets will be $18 each with a limited number of VIP seats for #30. Write to info@dreamteamfca.com or call 617.513.0202 to reserve your seats today.