All three entries of DreamTeam FCA were playing for top of the table honors on Sunday and all three found themselves in a different position at the end of the day.

The baby DT’s began the day with an undefeated and untied season but faced a strong Valeo FC Premier side eager to put a blemish on the U10’s record. However it did not take long for David Russell to make his mark on the match. He received a ball from Ryan Viana and outran the Valeo defenders to net his first of three. It was not long after that the squad’s leading goal scorer, “Neymar” Almeida became provider by delivering a pass to David Russell who netted his second. After Valeo got a goal back, “Neymar” added to his season leading tally by beating several players and putting the DreamTeam up by 2. The group finished their perfect season with an exclamation mark as David Russell got his hat trick by beating several Valeo defenders. The team showed resiliency during the entire campaign and finished at the top of their group. 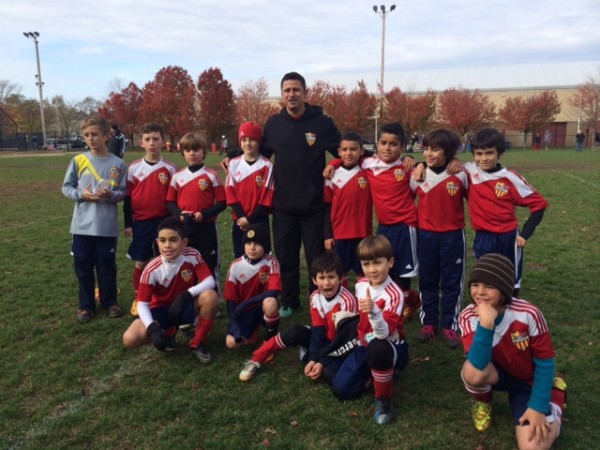 After travelling close to 2 hours to get to Western, Massachusetts, the U11 squad faced one of the better teams of the Red Division, Pioneer Valley Storm. The Storm suffered only a single defeat during the season and still had a chance to win the group with a win against our DreamTeam. The 11s also started quickly scoring two unanswered goals with swift passing and clinical finishing.

It started off with Brandonn Bueno crossing the ball to Joel Russell. Joel received the ball with his back to goal and turned beautifully and netted the goal. A few minutes later, right back Kevin Nunes delivered a perfect pass across field to Felipe Andrade. Picking up his head, Felipe saw the unmarked Bueno. Brandonn scored and DreamTeam was in the drivers seat. But the wheels soon came off for the 11s. GK Bruno Kajiwara tipped a Storm drive off the post and covered the ball to keep the Storm off the board. But that was a temporary reprieve. After giving up a corner kick, the DT players could not make a good clearance and the Storm headed in for their first. Some clever dribbling down the left channel gave two opportunities to the Storm and they capitalized on both and took the lead 3-2.

DreamTeam came out for the second half looking for the equalizer and dominated play with several squandered chances. An intelligent throw in by Andrade found Brandonn Bueno, who negotiated the ball by his marker and finished at the near post making it 3-3. With 5 minutes to play, Felipe Andrade scored a “gol olìmpico” by hitting his corner kick directly into the goal. But the ensuring kickoff saw the Storm go right by the weary DT defense that split the points for the two teams. With the 4-4 score, the DT 11s must watch the scoreboard, to see the results to determine if they are first or second in the Red U12 Division.

It was completely different for DreamTeam’s U12 Boys. Sitting on top of the league, they faced the second place Abbey Villa SC Barcelona and it did not take long for the home side to show they were there to play. Taking advantage of mistakes on the back line, Abbey Villa scored two quick goals. Not long into the contest, the 12s fell down by 3 and they were chasing the game. It took a second half goal off a free kick by Lucas Da Silva that got the DT on the board, but they could not get any closer. The loss, the first of the season for the senior squad, left the DreamTeam Blue even on points with Abbey Villa (20) for first position in their group but lost the title by goal differential (19-18). It was a great first season for this team that had the shortest amount of time together of any of the DreamTeam entries.

The indoor season began with the U14 side enjoying an 8-2 victory. Ygor Azevedo, Caio Santiago, Santiago De Avila (2), Alex Pimenta, Pedro Robbins (2) and Cleyton Ribeiro provided the offense. After falling down 2-0, the team hit for 8 unanswered goals.