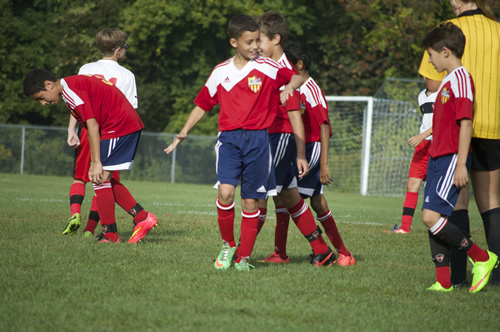 DreamTeam FCA’s unbeaten streak continued as the U10 and U11 squads picked up all three points along with a spirited U12 match ending in 3’s.

The home date began with the U11 squad controlling play against John Smith’s U12 Soccer Club. After several opportunities went unrewarded, Michael Alpers pounced on a loose ball, sending a strike that the goalkeeper could not handle. An opportunistic Jaime Garcia jumped on the rebound, providing the DT11s the early goal. A solid midfield performance from Brandonn Bueno, who dominated the midfield with his probing passes, struck for 2 of the team’s goals. Junior Balla, Kevin Nunes and two goals from Bruno Kajiwara, who shed his keeper kit for a 10 minute run at the forward line finished off the 7-2 final.

The second match saw more of the same, with DreamTeam U10s putting up a 7-1 score against Liverpool SC. The scoring began with a Ryan Viana run passing to Bryann “Neymar” Almeida whose centering pass found Jordi Tornberg Ayala at the top of the box, who broke through the Liverpool defense to finish against the helpless keeper. The goal took 45 seconds and set the tone for much of the match. Shortly thereafter, Daniel Bueno scored off a corner kick after a cheeky give and go with Kaik Reis. Kaik then put himself on the score sheet, finishing off an errant goalkeeper clearance. Neymar’s perfectly placed throughball found a streaking Cauane De Andrade who went one v one with the keeper, finishing into the corner. Daniel Bueno and Kaik Reis each added a second goal with Neymar finishing a run to complete the scoring and the romp.

The DT U12s came up against a very stubborn Rams defense, one that had given up only 2 goals in their first 2 matches. The Rams went up a goal against the run of play only to have DreamTeam equalize with a through ball from Richard Nunes to Brandonn Bueno who finished expertly into the left corner of the goal. An attempted clearance of a DT corner went to a perfectly placed Max Stakun-Pickering who expertly drove his shot into the far corner beating a sprawling Rams keeper. The scoring for the DT ended with a Richard Nunes’ goal who was finally rewarded after several runs that were thwarted by the stingy Rams defenders and keeper. Up 3-1 with time passing, the Rams fought back taking advantage of gaps around the 18 yard box, scoring 2 goals to tie the match at 3-3. The day ended with the teams sharing points, keeping all 3 teams undefeated for the 2014 Fall Season.