The regular season came to an end for several entries of DreamTeam and it ended as it began… teams showing their character and class throughout the matches. 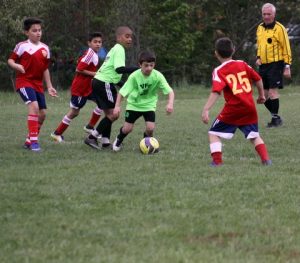 Xande prepares to strip opponent of the ball

The morning began with DreamTeam’s U11 side taking on JSSA in a very lopsided affair. DreamTeam struck early and often and kept JSSA on their back foot in this 9 v 9 event. Henry Romero opened the scoring and added to his torrid season of finding the net. Jordi Tornberg Ayala got DT their second. Nico Chapparo imitated Leonel Messi as he dribbled through and by the entire JSSA team prior to finishing into the corner of the net. Kaik Reis showed his ability out of his U10 goalkeeping

Nick Ribeiro fighting off the challenge

responsibilities by hitting for 2. Daniel Fabiano’s long range blast found the net as did Donovan Barrios who found a loose ball at the top of the box and fired home. DreamTeam 7, JSSA 1.

The U10s followed up with another entertaining and hard fought win against new visitors from Franklin County. The match went back and forth with Franklin County getting on the board first with a generous offside no call. A hand ball in the box led to Jordi Tornberg Ayala burying his penalty kick and tying up the score. The visitors struck again taking a 2-1 lead until Alexandre (Xande) Santos took a run from his central defense position and after beating several players on the end line finishes from what appeared to be an impossible angle. Shortly after, Kaik Reis delivered a counter attack that found Jordi beating his defender and going 1 v 1 with the keeper. He smartly finished into the net for the 3-2 DreamTeam victor.

DreamTeam’s U13 team fought off a lack of substitutions, playing with only 11, and found themselves on the short end of a 3-4 result. Alexis Barrios’ free kick into the near post gave life to the 13s. Lucas Da Silva continued his scoring with a great goal from distance. When Franco Silveiro Jr. hit for the squads third it looked like the team could hang on for a win. But fatigue was too much and Forza SC came up with 2 of their own to take the match.

U16 DreamTeam Everett continued to improve their play as they dominated possession from start to end. And while the squad continued to grow as a group, lack of finishing in the final third again haunted the team. Brandon Alanis hit for the team’s only goal. Final score DreamTeam 1 Taunton Eagles 1. 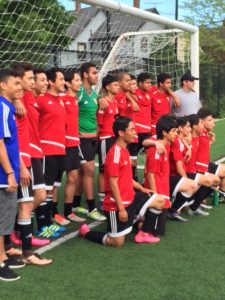 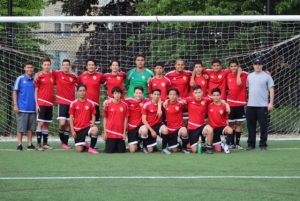 As a very special thank you – the club wishes to again thank Drita, Gustavo and your entire family for hosting an end of the year BBQ for the U10,11 and 13 DreamTeam after their matches. Your hospitality and generosity is appreciated by everyone. It was a joy to see the kids together…eating, relaxing and playing. And a thank you to all the parents for your commitment to DreamTeam children…taking them to practices and matches…a true sacrifice of love. 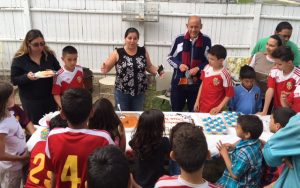 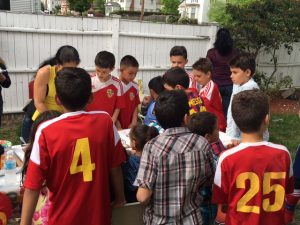 THANK YOU DRITA, GUSTAVO AND FAMILY!