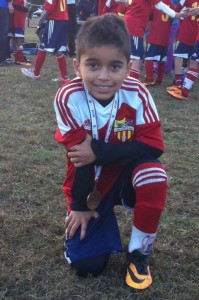 The Under 10 Boys, led by the 4 goals of Bryann “Neymar” Almeida, defeated the New England Rush 7-0. After several spectacular saves by the Rush keeper, Cauane De Andrade broke the deadlock getting on the end of a rebound to get the early lead. The strikes by “Neymar”, Jordi Tornberg Ayala and Victor Schimmelpfenning along with the fine goalkeeping of Jackson Contois and Gabriel Laudares allowed the DreamTeam U10s to cruise.

The DT Under 11 squad never was in danger as they took advantage of the several opportunities given up by America FC. DreamTeam players showed skill and composure as they passed around the home team’s challenges and took advantage of space. Goals scored by Junior Balla, Michael Alpers, Dylan Henao, Jaime Garcia along with 2 each from Brandonn Bueno and Felipe De Andrade secured the comfortable victory.

Our Under 12 team squandered a 3-0 halftime lead and had to settle for a 4-4 draw with a resilient Fuller Hamlet side. A goal by Lucas Da Silva and two strikes by Richard Nunes established the halftime lead. After Fuller Hamlet cut the lead to 3-2, DreamTeam scored from an impressive header by Raffaele Bauer off a corner kick by Miguel Miranda to the far post, restoring a two goal lead. Fuller Hamlet secured the draw with 2 goals, taking advantage of a defensive lapse and a call for a PK by the referee.