Marlborough Forekicks served as host as the U16 DreamTeam faced an NEFC squad that had dominated the first match of the season. The rematch however was a totally different enterprise as the DT16s pounded their adversary 12-4. The club shined from the beginning as Rafael Coelho stole an early goal clearance to walk in and finish for a 1-0 lead. Opening up the attack, keeper Luis Sa found the feet of Gustavo Cassemiro who one timed a shot for DT’s second. A turnover in the mid-court gave some life to NEFC as they cut the lead in half. But the combination play from Jonathan Ferreira to Manny Nunes who played immediately to Cassemiro. Gustavo took the ball off his chest and calmly volleyed the ball into the back of the net. Gustavo hit his third and fourth, first by stealing a pass and toe poking a blast by the bewildered keeper and then receiving a pass from the side restart and scoring at the far post.  Again keeper Sa, who was stellar in goal all night by smothering most of what NEFC had to offer, got into the attack. 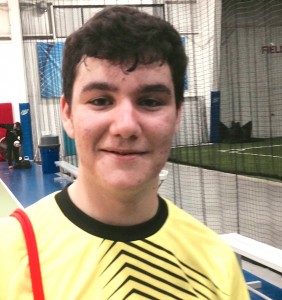 His long throw found Paulinho DaSilva who again showed his quality with his smooth finish. And while NEFC got their second, DT 16s answered quickly as Paulinho passed to Manny who found Gustavo. Another strike from Gustavo, his 6th of the evening made moot the third by NEFC. Lucio added to the DreamTeam’s tally but it was a Manny Nunes’ goal, who broke in on goal and rolled the ball around a sprawled out keeper that left the observers breathless.  Matheus Chaves, active all night creating opportunities for DT and problems for NEFC got into the scoring stats. His corner was one-timed into the upper ninety for by Paulinho for his second. Then Paulinho returned the favor by serving up a corner to Matty who scored his first of the night for the 16s. After NEFC got some consolation with their fourth, Jonathan calmly nutmegged NEFC’s pivot in the mid-court and then dribbled around the other 3 opponents on the court before scoring and sealing what was a convincing win for the squad. 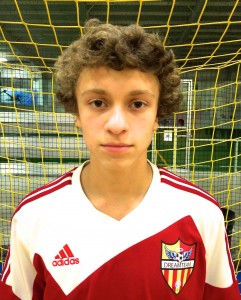 The DreamTeam U11s opened the day by continuing their undefeated run. Facing the Striker U12s, it took little time for Felipe De Andrade to show the team’s Futsal superiority on the day. Felipe’s natural hat-trick followed by Luan Da Silva and Bryann “Neymar” Almeida goals provided a 5-0 lead. Not satisfied, the squad scored twice more with Felipe’s fourth and Luan’s second prior to the closing of the first half. Up by seven, the group allowed some hope to the Strikers who opened the second half with 3 goals of their own. But Brandonn Bueno’s corner found Michael Alpers, who’s shot and rebound was pounced on by an ever alert Neymar and the team was back in the drivers seat. Neymar hit #3 soon after and Brandonn hit his first to provide more comfort in the game. Brandonn’s toe poke began the next round of goals as Felipe got this 5th from a Joel Russell restart from the side and his 6th of the morning off a rebound. Joel finished a shin pass from Brandonn and the squad coasted to a convincing win.

It was not so kind an outing for the U10 DreamTeam squad as they ran up against a very strong FC Star unit. The Stars showed their superiority right from the kickoff, scoring 4 times in the first 5 minutes to open up the match. The baby DTs had little to answer as they were put on their heels for most of the match. The Stars never wavered throughout the first half as they put in goal after goal with their keeper stopping any of the chances put forth by DreamTeam. The baby DTs gave a better performance in the second half,as Kaik Reis substituted in goal and made tremendous saves. It was into the second half that Ryan Viana put the DreamTeam on the board with a great goal but the attack of the Stars was too much for the young squad as they routed the baby DTs 18-1.

DreamTeam’s U12 boys faced a determined FC Bolts team looking to take over the top spot. The back and forth match was opened by the Bolts who beat keeper Vitor Barros early. But Vitor was secure throughout the contest, turning back numerous chances. His goal clearances started several of the DreamTeam’s attack from the back. It was Brandonn Bueno who answered each goal by the Bolts with three of his own and the score was knotted at 4-4 with 2 minutes to play. Oliver Sharpe, who disrupted the Bolts rhythm throughout the day, won the ball as the opponents were trying to organize in the attacking zone and fed Brandonn who blasted his 4th goal of the match….game, set, match….DreamTeam FCA 5 Bolts FC 4!